Kris and I were watching The Kitchen on Food Network last weekend and Sunny Anderson put together some flank steak fajitas with chimichurri sauce and drunken peppers that looked amazing so decided to cook them up for our Wednesday dinner with friends. I added some grilled shrimp and fresh guacamole to complete the meal.

The chimichurri is fresh, easy and tasty. You just need to gather up all the ingredients and toss into a food processor. Blend until smooth. Use half to marinate the flank steak and the other half to serve with the fajitas. 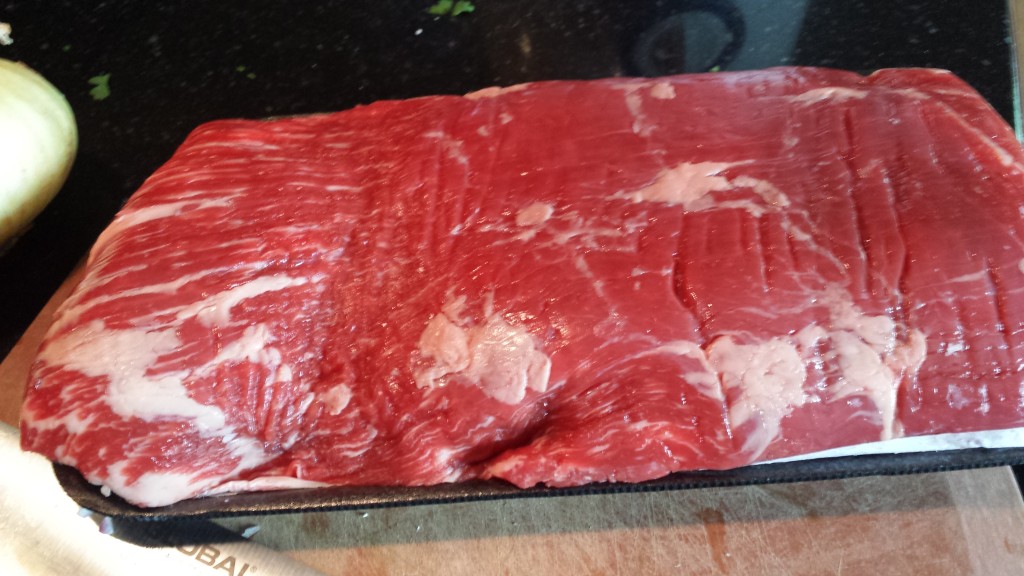 Take the flank steak out of the fridge and place in a large plastic bag. Pour the chimichurri over the steak and let marinate at room temp for 1-2 hours.

Grill for about 8 minutes per side. You want this to be medium rare for maximum flavor! Pull off the grill and let rest 10 minutes before slicing. While the steak was resting I tossed the shrimp in a grill basket and grilled for about 6 minutes.

Slice the steak against the grain, this will make each bite super tender.

For the drunken peppers you just need 4 bell peppers, 2 pablanos, 2 jalapenos, 1 sweet onion and a can of beer. Slice into strips, saute in olive oil for about 8 minutes. Pour the beer over the peppers, cover and cook for an additional 10 minutes.

I had a couple avocados laying around so whipped of some fresh guac to top the fajitas with. This is quick and easy to prepare – 2 avocados, some diced red onion, 1 clove of garlic, juice from half a lemon, diced tomatoes, hot sauce, salt and pepper. Just toss it all in a bowl and mix it up! Serve with tortillas or just pile on a plate. Cheers!

Make the chimichurri:
In a food processor, combine the parsley, cilantro, garlic, red onion, paprika, vinegar, olive oil, salt, and pepper. Blend until smooth. Reserve half for drizzling on the fajitas. Place the remaining half in a large resealable plastic bag.

Marinate the steak:
Place the steak in the bag with the marinade, squeeze out excess air, and seal. Rest at room temperature 1-2 hours.

Make the peppers:
In a large straight-sided pan with a lid, heat the oil over medium-high heat. When the oil begins to swirl, add the poblano, bell, and jalapeno peppers, and the onion. Season with a pinch of salt and a few grinds of pepper. Cook, stirring, until softened and slightly caramelized around the edges, 6 to 8 minutes. Add the beer, cover, and reduce the heat to medium. Cook until all the vegetables are plump and tender, about 10 minutes. Remove from the heat.

Grill the steak:
Preheat a grill or grill pan to medium high. Remove the steak from the marinade and discard the marinade. Season the steak with a pinch of salt and a few grinds of pepper on both sides. Grill the steak, flipping just once, until cooked to medium rare, 5 to 6 minutes per side. Transfer the steak to a plate, cover loosely with aluminum foil, and let rest for 10 minutes before slicing.

This entry was posted in Grilling. Bookmark the permalink.