Last weekend Kris and I, along with a couple friends, ran the Everybody’s Irish 5K. A nice way to start the day. After the race we went to The Lowry for breakfast and Bloody Marys, always a good choice after running! Well The Lowry has a breakfast burrito that sounded tasty but it came wrapped in a flour tortilla so I was bummed. However our waitress said they could make it using corn tortillas.

Instead of wrapping the burrito up, the tortillas came on the side, which allowed me to have 3 mini ‘breakfast tacos’. This was so good I decided to give it a try at home – Big Man style. It turned out great! This “burrito” is a layered mix of hash browns, scrambled eggs, sauteed onions and peppers and chorizo sausage. 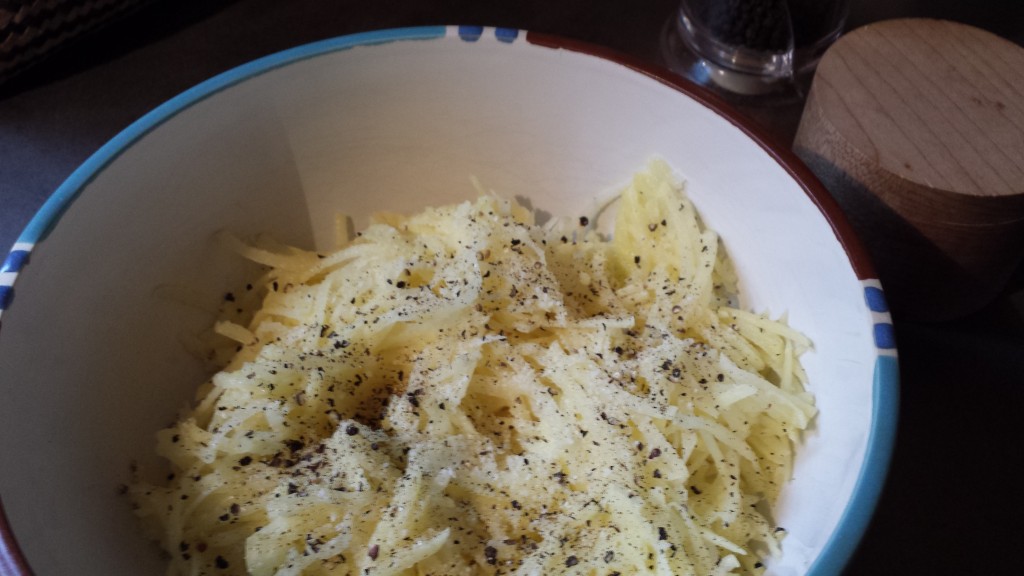 First get out the food processor and shred some potatoes. Season with salt and pepper, add some olive oil to a saute pan and heat to medium high. 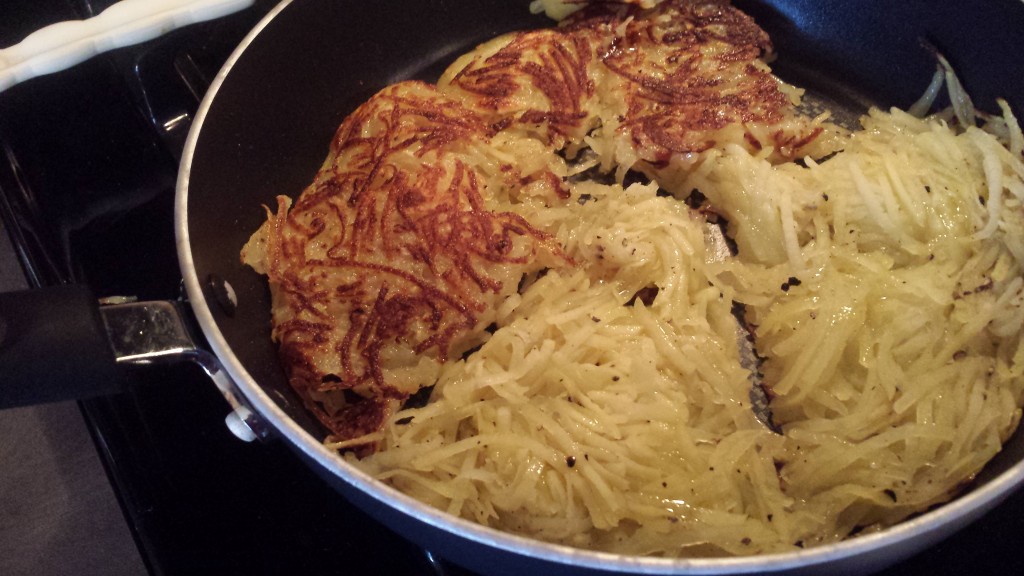 Add the shredded potatoes to the hot oil, flatten to make an even layer, cook for about 8 minutes. Now it is time to flip. Before flipping over, drizzle some olive oil on the potatoes to help crisp up this side. Flip in sections and continue to cook. 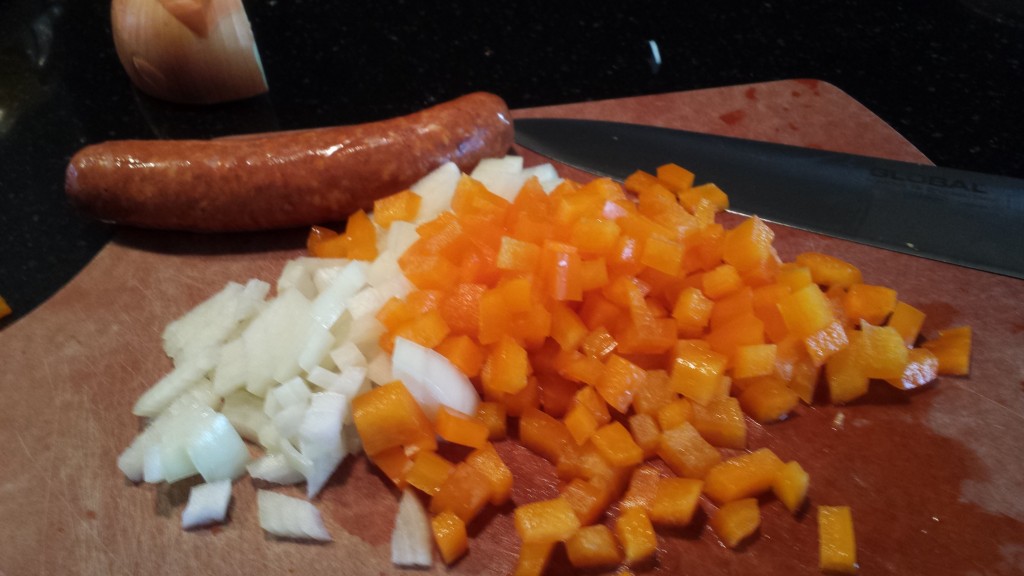 While the hash browns are cooking, dice some pepper and onions. I also diced up some chorizo sausage to add to the mix. You can add any type of breakfast meat here and I am sure it would turn out just as tasty.

Saute this mixture until sausage is crispy and veggies are tender. Don’t forget to season with salt and pepper. 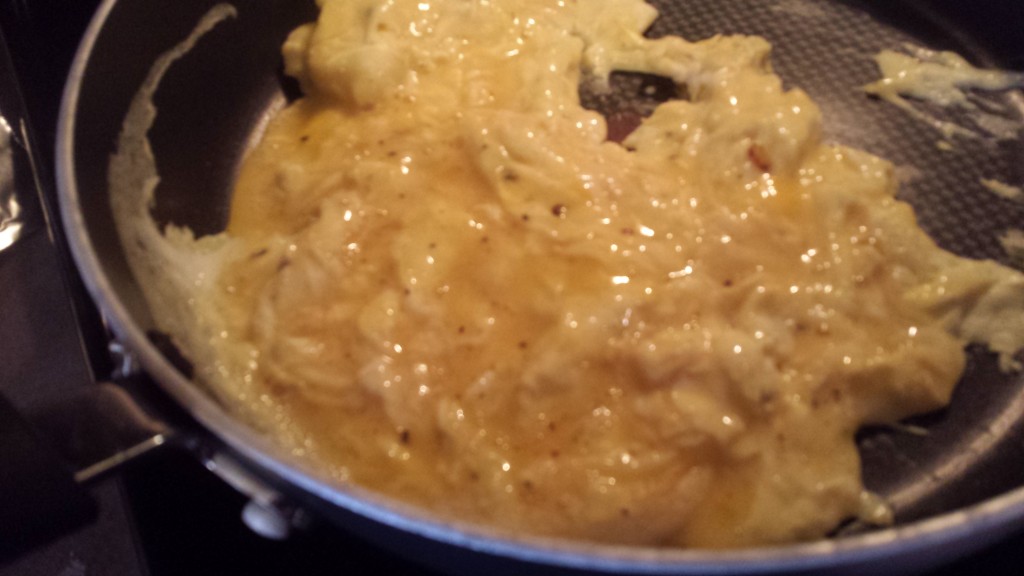 Grab another pan and cook up the eggs. To make the scrambled eggs fluffy be sure to add 1 tablespoon of water when beating the eggs. Once everything is done it is time to grab a plate and layer up – hash browns- eggs-onion,pepper, meat mix. Warm some corn tortillas and serve. I of course topped mine with some chimchurri sauce to spice things up. 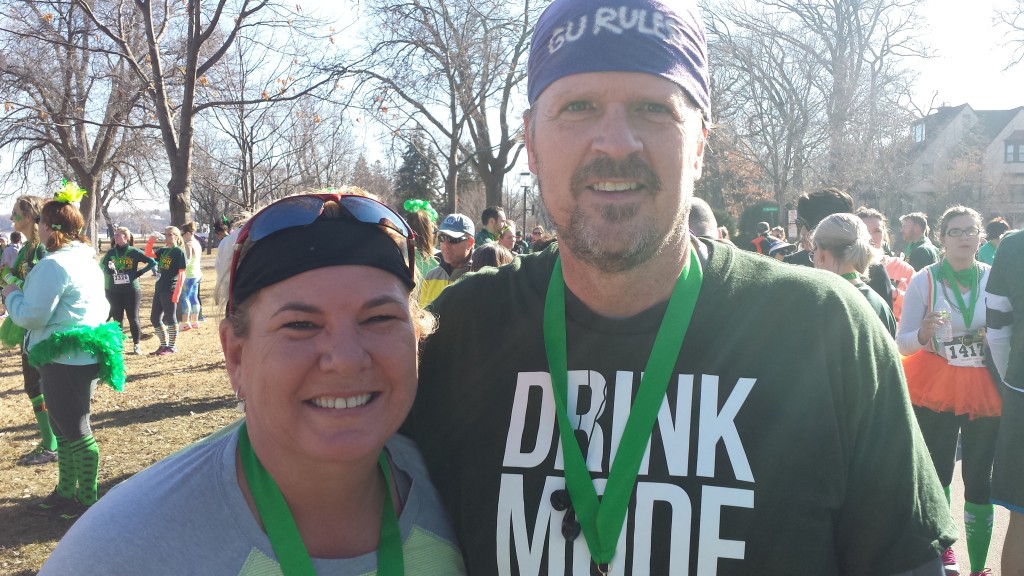 Looking forward to the race again next year! Cheers!

This entry was posted in Breakfast. Bookmark the permalink.